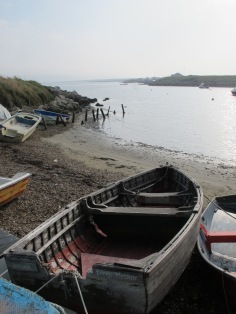 It’s no surprise if writers are a little odd. It’s an occupational hazard caused by spending so much time in your own head. But until the other day I hadn’t realised the oddity was visible, too.

I live by the sea, and one of the joys of my life is go down to the little beach nearby and watch the tide come in. There is something very soothing about watching time passing in this way. It’s also a very good background occupation while I’m working out what to write next.

So there I was, standing at the water’s edge, engrossed in both the puddling and ripples of the rising tide and a particularly knotty plot-hole in my current writing project, when a voice said, “Excuse me…”

I turned and discovered an old gentleman, complete with walking stick, looking at me earnestly.

“I just wondered if you were all right?” he said. 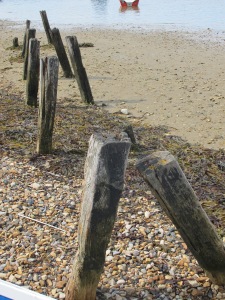 I climbed rapidly out of my reverie, and my plot-hole, too, and assured him that I was perfectly fine, thank you. He went on to say that he had seen me standing there alone for a long while (I often stand for an hour or more, losing all track of time – another occupational hazard), and thought he would just come down and check that all was well. He had hobbled down onto the beach – it’s a bit of a scramble, with no proper steps – across the shingle and all the way down to the tide line, walking stick and all.

I’m not sure what he thought I was going to do – perhaps hurl myself into the three inches of water in front of me – but I told him I simply enjoyed watching the tide advancing. I thought it better not to mention the writing or the plot-hole, which could only confuse the issue. He seemed satisfied that I was neither lost nor suicidal, so I thanked him for his kind concern, and he set off back up the beach on wobbly legs, looking more in need of my assistance than I was of his. I only hoped he would make it before the tide caught up with him.

But this curious little episode set me thinking. I had not considered it at all odd to stand alone and watch the water as I so often do, lost in thought. But other people apparently do. It’s one more step, I suppose, towards becoming a proper eccentric. I guess I can live with that. Perhaps I should carry leaflets detailing my books to hand out to any future rescuers. It’s a thought.

All my books have been set in the eighteenth century, really. The first three were in a fantasy version – the Larus Series – but having found them difficult to promote, being untypical fantasy, I thought the obvious thing to do would be to move on to historical fiction and that is what I did.

So here I am, with my first historical fiction title scheduled for release this December. Wonderful. I loved writing the book; I enjoyed the research; it all went awfully well. Spiffing stuff. Then I began taking an interest (probably a little too late) in the historical fiction genre, and discovered a whole new can of worms, as they say.

To begin with, I find I’m unsure whether I’ve written historical fiction or a historical novel. A toe-curling admission, no? There seem to be boundaries, but no-one seems entirely sure what they are, least of all me. This sort of writing falls broadly into two camps: a fictionalised version of real events and real people; or a work of pure fiction –  invented characters, invented story, set in the past.

My novel falls squarely within the second camp; it’s all invention except the general eighteenth century setting. I’m not attempting to interpret or recreate history. I just find the past a quieter place to work in. I’d happily admit that I’m creating a past that probably never was. So have I slipped into historical fantasy, then? Well, no, I don’t think so. There’s nothing in the story that absolutely couldn’t have happened – much of it was inspired by the research I did. But it’s not real. It’s not based on historical figures or events. Now then, is that historical fiction, or a historical novel? Or even something else? Answers on a postcard, please…

Off the beaten track. The Isle stands in the English Channel, just off Weymouth. Sometimes. It has a habit of disappearing suddenly, making it the ideal secluded holiday destination.

Old fashioned charm. Since Larus is set permanently in the 18th century, there is no traffic, no aircraft, no pollution, no crowds. The only way to get here is by sailing boat – the perfect relaxing start to your visit. Dig out your tricorne hat and join in the fun!

Excitement. For the more adventurous visitor, there is plenty to do. Strange events happen daily. Would you like to encounter a fleet of completely impossible ships? Or a pirate chased by a vengeful waterspout? This is the place to find them. You’ll never be bored on Larus.

Highly Recommended. Visitors tell us they’d like to stay here forever, and you can’t give higher praise than that. You won’t find us on TripAdvisor, but some people do leave lovely reviews on Amazon.

Great value. You can visit Larus for just £1.99. No queues, no crush, no passport necessary. Truly the perfect holiday. Smiles guaranteed.

Visit the Isle of Larus, the English Channel’s best-kept secret. 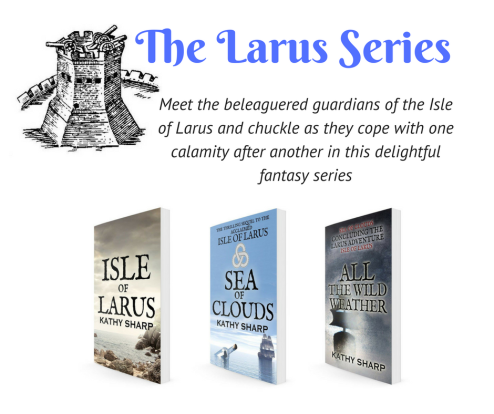