A Fish in the wall

I liked this bit of artwork so much I incorporated it into one of my books. I turned

it into the Fish in the Wall Inn (Whales and Strange Stars, to be published late 2017, in case you were wondering). This fish with other sea-creature neighbours is reproduced in stone in an exterior wall at the Chesil Beach Centre, Portland, Dorset. Love it.

Come and see my etchings… 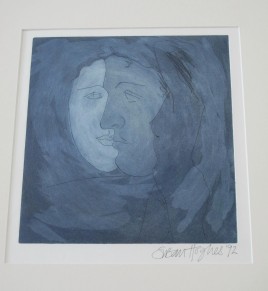 by Dorset artist and illustrator Susan R Hughes, and I first saw it at a writers’ meeting held at her studio some years ago. We were all asked to choose one of Susan’s thought-provoking artworks and write a piece about it. Guess which one I chose? I thought it contained three faces, but when you look closely at it you find one of the faces is actually a torso. Fascinating. So I bought it. The enigmatic faces have watched me at work ever since.

I first heard of the Spooky Men’s Chorale when I learned to sing one of their songs, The Sweetest Kick, with my own choir, Island Voices. It was a very out-of-the-ordinary song, and I rushed off to find it on YouTube and hear the Spooky Men sing it themselves. I wasn’t disappointed. This Australian acapella choir is a joy to listen to, but dead funny, too. Their version of Abba’s Dancing Queen had me in fits of giggles. To find out more, hear them sing (and see the best hats around) have a look at the spooky website .

We’re still practising The Sweetest Kick, but I doubt we’ll ever be able to perform it with as much individuality as the Spooky Men. They’re touring the UK in Summer 2017, by the way.

When we put our minds to it, we British can do quirky as well as anyone in the world, and the Mummers Play is a splendid example of this kind of eccentricity. This traditional Christmas entertainment still makes me laugh however many times I see it. It contains an odd mix of ingredients: St George, Father Christmas, a Turkish knight and a quack

Frome Valley Mummers get into a swordfight and threaten to take the Christmas decorations and some of the audience with them.

doctor using very unorthodox methods of treatment. These are strung together with unconvincing swordfights and rhyming dialogue, often going spectacularly awry. That, at least, is how it’s done in local performances by the Frome Valley Mummers – the exact combination of story and characters varies around the country, apparently. The Island Voices Choir’s Christmas party on Portland wouldn’t be the same without it.